What  is Thoracic Outlet Syndrome?

TOS is an umbrella term that encompasses three related syndromes that involve compression of the nerves, arteries, and veins in the lower neck and upper chest area and cause pain in the arm, shoulder, and neck.  Most doctors agree that TOS is caused by compression of the brachial plexus or subclavian vessels as they pass through narrow passageways leading from the base of the neck to the armpit and arm, but there is considerable disagreement about its diagnosis and treatment. Making the diagnosis of TOS even more difficult is that a number of disorders feature symptoms similar to those of TOS, including rotator cuff injuries, cervical disc disorders, fibromyalgia, multiple sclerosis, complex regional pain syndrome, and tumors  of the syrinx or spinal cord.  The disorder can sometimes be diagnosed in a physical exam by tenderness in the supraclavicular area, weakness and/or a “pins and needles” feeling when elevating the hands, weakness in the fifth (“little”) finger, and paleness in the palm of one or both hands when the individual raises them above the shoulders, with the fingers pointing to  the ceiling.  Symptoms of TOS vary depending on the type. 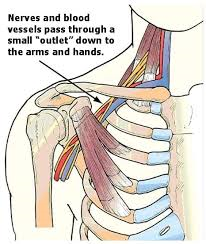 Neurogenic TOS has a characteristic sign, called the Gilliatt-Sumner hand, in which there is severe wasting in the fleshy base of the thumb. Other symptoms include paresthesias (pins and needles sensation or numbness) in the fingers and hand, change in hand color, hand coldness, or dull aching pain in the neck, shoulder, and armpit.

Venous TOS features pallor, a weak or absent pulse in the affected arm, which also may be cool to the touch and appear paler than the unaffected arm.  Symptoms may include numbness, tingling, aching, swelling of the extremity and fingers, and weakness of the neck or arm.
Arterial TOS most prominently features change in color and cold sensitivity in the hands and fingers, swelling, heaviness, paresthesias  and poor blood circulation in the arms, hands, and fingers..

There are many causes of TOS, including physical trauma, anatomical defects, tumors that press on nerves, poor posture that causes nerve compression, pregnancy, and repetitive arm and shoulder movements and activity, such as from playing certain sports.  TOS is more common in women.  The onset of symptoms usually occurs between 20 and 50 years of age.  Practitioners usually recommend nerve conduction studies, electromyography, or imaging studies to confirm or rule out a diagnosis of TOS.

Is there any treatment?

Treatment begins with exercise programs, physical therapy and chiropractic to strengthen chest muscles, restore normal posture, and relieve compression by increasing the space of the area the nerve passes through.   Doctors will often prescribe non-steroidal anti-inflammatory drugs (such as naproxen or ibuprofen) for pain.

Chiropractic Options Offered at Fit for Life Wellness & Rehabilitation Centre: Dr. Luciano Di Loreto (Chiropractor) and his team of health therapists can help you rehabilitate your muscles after an elbow injury via both active exercises as well as passive treatments. Our extensive passive treatments include laser therapy (healing), ultrasound (healing), electrotherapy (pain), hot/cold therapy and soft tissue therapy. Treatments are usually booked two to three times per week for six to eight weeks. Full recovery varies from individual to individual.

What is the prognosis?

The outcome for individuals with TOS varies according to type. The majority of individuals with TOS will improve with exercise, chiropractic  and physical therapy.  Vascular TOS, and true neurogenic TOS often require surgery to relieve pressure on the affected vessel  or nerve.

Credit to the NINDS

Fit for Life Wellness & Rehabilitation Centre
5.0
Based on 90 reviews

Lauren Pham
01:20 03 Sep 20
I've been going to Fit for Life Wellness since January and their service is admirable. My physiotherapist is Sudeep and... he is very nice to me. Overall, I recommend Fit for Life for anyone that has major or minor injuries. It is also very kids friendly. Oh, by the way Tara our secretary is amazing 🙃. And last but not least Luciano how can I forget him, he's very friendly.read more

eugene garcia
16:11 13 Aug 20
Great people. They know what they are doing. Establishment is nice and elegant. Would recommend this place for anyone... who needs a good chiropractor. Will definitely come back for more rehabilitationread more

Michele C
17:41 11 Aug 20
Sudeep was a wonderful physiotherapist. He was able to diagnose and provide a treatment plan for my wrist that made me... feel pain-free after a couple of treatments. He's knowledge in his field and I would recommend him to others.read more

Josh Z
23:53 06 Aug 20
This is a great clinic! They will cover all your needs. Chiropractic, physio, massage therapy. Wonderful staff, very... organized and clean.Every client is treated with the utmost care.I highly recommend visiting if you are in need.read more

Klea Xhaferi
17:15 23 Jul 20
I would highly recommend coming here! The service is wonderful and the new space looks fantastic! I was first referred... here by a family member, and I am extremely satisfied with the results. I have been seeing Dr. Luciano for my neck/back pain that has been bothering me for months and have been feeling much better in just a few sessions. You can tell right away that he is very dedicated to his clients and honest.. Thank you so much!read more

Joe Triolo
00:31 20 Jul 20
I would like to thank the Fit for Life team. I hurt my rib and the physiotherapist and chiropractor were able to assist... me. The chiropractor Dr. Luciano adjusted my slipped rib and it immediately alleviated my pain. I received some exercises from the physio and within a few days was back doing the things I love. Thank you so much! The new space looks amazing and is very clean and well organized. Best of luck and I will be back.read more

aanal shah
22:20 07 Jul 20
I took Physiotherapy sessions with Sudeep Deshpande. He is an amazing and very cheerful person. He listens everything... very carefully and give adequate amount of time for treatment.read more

Nathan Neto
20:53 03 Jun 20
A few weeks ago I was diagnosed with Bell’s Palsy. Luckily Dr. Luciano took me in and started immediately with... acupuncture and facial massages. After a few sessions, my face is back to 100% and it’s all thanks to Dr. Luciano. Happy to have my face back and more importantly made a new friend! Thank you!read more

Kevin
16:04 28 May 20
Dr.Luciano took me in on a last minute Friday call. Accommodated me in terms of a time slot and completely relieved my... back pain which subsequently relieved my chest pain! He definitely cares about his patients. Thanks Dr.Lucianoread more

Ella Papasodaro
19:34 05 May 20
Dr. Luciano and Dr. Felicia are wonderful, knowledgeable and professional. I have highly recommended them to several... family members. Appointment availability is fantastic, often same-day. They always go above and beyond for their patients. They really care about making sure they get to the root of the problem, and are always willing to offer recommendations for at-home care. They really make you feel like family. Good luck at your new location!read more

Dino Laurenza
14:54 16 Apr 20
I highly recommend Fit For Life clinic. Dr. Luciano is always there to help with the Physio/chiropractic needs that I... require. Along with his dedicated staff you will be well taken care of. They have a beautiful and very clean new location that is easily accessible. Do not hesitate to go visit them.read more

Leanna Suppa
15:19 25 Mar 20
My volunteer experience at Fit for Life Wellness and Rehab Centre was an amazing experience. I got to learn so many new... things. The staff was so helpful and kind. They made me feel like I was a part of their team from the first day I started there. Overall, I am extremely happy that I got work and learn about the therapy field with such an amazing group of people.read more

Phil A
15:00 23 Mar 20
Fit for Life Wellness is an amazing clinic that has many different services to offer. I recently completed my placement... at this clinic. Luciano Sudeep and Tara are all very helpful and great at what they do. I was able to learn a lot about both chiropractic and physiotherapy services that will be useful for my own career.read more

Asim A.
13:25 12 Mar 20
I’ve had a positive experience during sessions here. Dr. Luciano is a great chiropractor and is insightful in... answering questions or concerns. I would recommend this service to others.read more

Joe Cristiani
16:52 09 Mar 20
I have been going here for physiotherapy for the last 8 weeks. I was seeing Dr. Sudeep. He was absolutely amazing. He... treated me for my injury and I can’t thank him enough for all he has done for me. Thanks to him, I have recovered from my injury 100%. Everyone on staff here is absolutely fantastic. They are all so pleasant and very helpful. I truly recommend this place. Thanks for everything Dr. Sudeepread more

Urbanized Dreams
00:21 05 Mar 20
I have been going to this location now for many sessions. I originally came here with a lot back pain. After 6 sessions... with Dr. Felicia Huang all the back pain was removed. I want to say she offered me excellent service and I appreciated the honesty given during my visits. I highly suggest her since she is very knowledgeable and experienced and also polite. I recommended her to everybody including this business! Thank you very much Dr. Felicia.Vera Spatar.read more

game_freak 9
22:18 04 Mar 20
I highly recommend Fit For Life Clinic. I was involved in a MVA and Dr. Luciano took me in to start my treatment the... same day! He set me up with the Physiotherapist Sudeep, who is fantastic. Very professional, knowledgeable and caring. I can tell that is really passionate about his work and wants the patient to be comfortable and make a quick recovery. He is very accommodating with my schedule and always makes time. Thank you Sudeep for everything!read more

Sabrina Rameshwar
20:24 16 Oct 19
I am currently a 4th year student and was given the opportunity to complete my field placement at Fit for Life Wellness... and Rehabilitation Centre. My experience so far has been amazing! I was taught how to properly take care of patients and assist with many of the services Fit for Life has to offer. All staff including the chiropractors, physiotherapists, assistants, and receptionists are extremely kind and supportive! They take time to make their patients feel better and comfortable. As a student, I am glad to be involved in this centre!read more
Next Reviews