What is Bell’s Palsy?

Bell’s palsy is a form of temporary facial paralysis resulting from damage or trauma to the facial nerves. The facial nerve-also called the 7th cranial nerve-travels through a narrow, bony canal (called the Fallopian canal) in the skull, beneath the ear, to the muscles on each side of the face. For most of its journey, the nerve is encased in this bony shell.

Each facial nerve directs the muscles on one side of the face, including those that control eye blinking and closing, and facial expressions such as smiling and frowning. Additionally, the facial nerve carries nerve impulses to the lacrimal or tear glands, the saliva glands, and the muscles of a small bone in the middle of the ear called the stapes. The facial nerve also transmits taste sensations from the tongue. 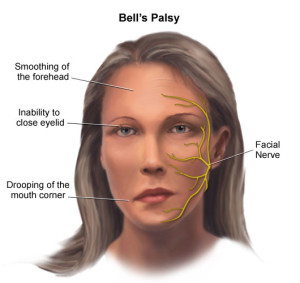 When Bell’s palsy occurs, the function of the facial nerve is disrupted, causing an interruption in the messages the brain sends to the facial muscles. This interruption results in facial weakness or paralysis.

Bell’s palsy is named for Sir Charles Bell, a 19th century Scottish surgeon who was the first to describe the condition. The disorder, which is not related to stroke, is the most common cause of facial paralysis. Generally, Bell’s palsy affects only one of the paired facial nerves and one side of the face, however, in rare cases, it can affect both sides.

What are the Symptoms?

Because the facial nerve has so many functions and is so complex, damage to the nerve or a disruption in its function can lead to many problems. Symptoms of Bell’s palsy can vary from person to person and range in severity from mild weakness to total paralysis.  These symptoms may include twitching, weakness, or paralysis on one or rarely both sides of the face.  Other symptoms may include drooping of the eyelid and corner of the mouth, drooling, dryness of the eye or mouth, impairment of taste, and excessive tearing in one eye. Most often these symptoms, which usually begin suddenly and reach their peak within 48 hours, lead to significant facial distortion.

Other symptoms may include pain or discomfort around the jaw and behind the ear, ringing in one or both ears, headache, loss of taste, hypersensitivity to sound on the affected side, impaired speech, dizziness, and difficulty eating or drinking.

Bell’s palsy occurs when the nerve that controls the facial muscles is swollen, inflamed, or compressed, resulting in facial weakness or paralysis. Exactly what causes this damage, however, is unknown.

Most scientists believe that a viral infection such as viral meningitis or the common cold sore virus—herpes simplex—causes the disorder. They believe that the facial nerve swells and becomes inflamed in reaction to the infection, causing pressure within the Fallopian canal and leading to ischemia (the restriction of blood and oxygen to the nerve cells).  In some mild cases (where recovery is rapid), there is damage only to the myelin sheath of the nerve.  The myelin sheath is the fatty covering-which acts as an insulator-on nerve fibers in the brain.

Bell’s palsy afflicts approximately 40,000 Americans each year.  It affects men and women equally and can occur at any age, but it is less common before age 15 or after age 60.  It disproportionately attacks people who have diabetes or upper respiratory ailments such as the flu or a cold.

How is it Diagnosed?

A diagnosis of Bell’s palsy is made based on clinical presentation — including a distorted facial appearance and the inability to move muscles on the affected side of the face — and by ruling out other possible causes of facial paralysis. There is no specific laboratory test to confirm diagnosis of the disorder.

Generally, a physician will examine the individual for upper and lower facial weakness.  In most cases this weakness is limited to one side of the face or occasionally isolated to the forehead, eyelid, or mouth.  A test called electromyography (EMG) can confirm the presence of nerve damage and determine the severity and the extent of nerve involvement.  Blood tests can sometimes be helpful in diagnosing other concurrent problems such as diabetes and certain infections.  A magnetic resonance imaging (MRI) or computed tomography (CT) scan can eliminate other structural causes of pressure on the facial nerve.

How is it Treated?

Bell’s palsy affects each individual differently.  Some cases are mild and do not require treatment as the symptoms usually subside on their own within 2 weeks.  For others, treatment may include medications and other therapeutic options.  If an obvious source is found to cause Bell’s palsy (e.g., infection), directed treatment can be beneficial.

Recent studies have shown that steroids such as the steroid prednisone –– used to reduce inflammation and swelling –have been used in treating Bell’s palsy.  Other drugs such as acyclovir — used to fight viral herpes infections — may also have some benefit in shortening the course of the disease.  Analgesics such as aspirin, acetaminophen, or ibuprofen may relieve pain.  Because of possible drug interactions, individuals taking prescription medicines should always talk to their doctors before taking any over-the-counter drugs.

Another important factor in treatment is eye protection. Bell’s palsy can interrupt the eyelid’s natural blinking ability, leaving the eye exposed to irritation and drying. Therefore, keeping the eye moist and protecting the eye from debris and injury, especially at night, is important.  Lubricating eye drops, such as artificial tears or eye ointments or gels, and eye patches are also effective.

Physical therapy and Chiropractic techniques can stimulate the facial nerve and help maintain muscle tone may be beneficial to some individuals.  Facial massage and exercises may help prevent permanent contractures (shrinkage or shortening of muscles) of the paralyzed muscles before recovery takes place. Moist heat applied to the affected side of the face may help reduce pain.

Other therapies that may be useful for some individuals include relaxation techniques, acupuncture, electrical stimulation, biofeedback training, and vitamin therapy (including vitamin B12, B6, and zinc), which may help restore nerve function.

In general, decompression surgery for Bell’s palsy — to relieve pressure on the nerve — is controversial and is seldom recommended.  On rare occasions, cosmetic or reconstructive surgery may be needed to reduce deformities and correct some damage such as an eyelid that will not fully close or a crooked smile.

What is the Prognosis?

The prognosis for individuals with Bell’s palsy is generally very good.  The extent of nerve damage determines the extent of recovery.  Improvement is gradual and recovery times vary.  With or without treatment, most individuals begin to get better within 2 weeks after the initial onset of symptoms and most recover completely, returning to normal function within 3 to 6 months.  For some, however, the symptoms may last longer.  In a few cases, the symptoms may never completely disappear.  In rare cases, the disorder may recur, either on the same or the opposite side of the face.

–Credit to the NINDS

Fit for Life Wellness & Rehabilitation Centre
5.0
Based on 80 reviews

aanal shah
22:20 07 Jul 20
I took Physiotherapy sessions with Sudeep Deshpande. He is an amazing and very cheerful person. He listens everything... very carefully and give adequate amount of time for treatment.read more

Nathan Neto
20:53 03 Jun 20
A few weeks ago I was diagnosed with Bell’s Palsy. Luckily Dr. Luciano took me in and started immediately with... acupuncture and facial massages. After a few sessions, my face is back to 100% and it’s all thanks to Dr. Luciano. Happy to have my face back and more importantly made a new friend! Thank you!read more

Kevin
16:04 28 May 20
Dr.Luciano took me in on a last minute Friday call. Accommodated me in terms of a time slot and completely relieved my... back pain which subsequently relieved my chest pain! He definitely cares about his patients. Thanks Dr.Lucianoread more

Ella Papasodaro
19:34 05 May 20
Dr. Luciano and Dr. Felicia are wonderful, knowledgeable and professional. I have highly recommended them to several... family members. Appointment availability is fantastic, often same-day. They always go above and beyond for their patients. They really care about making sure they get to the root of the problem, and are always willing to offer recommendations for at-home care. They really make you feel like family. Good luck at your new location!read more

Dino Laurenza
14:54 16 Apr 20
I highly recommend Fit For Life clinic. Dr. Luciano is always there to help with the Physio/chiropractic needs that I... require. Along with his dedicated staff you will be well taken care of. They have a beautiful and very clean new location that is easily accessible. Do not hesitate to go visit them.read more

Leanna Suppa
15:19 25 Mar 20
My volunteer experience at Fit for Life Wellness and Rehab Centre was an amazing experience. I got to learn so many new... things. The staff was so helpful and kind. They made me feel like I was a part of their team from the first day I started there. Overall, I am extremely happy that I got work and learn about the therapy field with such an amazing group of people.read more

Phil A
15:00 23 Mar 20
Fit for Life Wellness is an amazing clinic that has many different services to offer. I recently completed my placement... at this clinic. Luciano Sudeep and Tara are all very helpful and great at what they do. I was able to learn a lot about both chiropractic and physiotherapy services that will be useful for my own career.read more

Asim A.
13:25 12 Mar 20
I’ve had a positive experience during sessions here. Dr. Luciano is a great chiropractor and is insightful in... answering questions or concerns. I would recommend this service to others.read more

Joe Cristiani
16:52 09 Mar 20
I have been going here for physiotherapy for the last 8 weeks. I was seeing Dr. Sudeep. He was absolutely amazing. He... treated me for my injury and I can’t thank him enough for all he has done for me. Thanks to him, I have recovered from my injury 100%. Everyone on staff here is absolutely fantastic. They are all so pleasant and very helpful. I truly recommend this place. Thanks for everything Dr. Sudeepread more

Urbanized Dreams
00:21 05 Mar 20
I have been going to this location now for many sessions. I originally came here with a lot back pain. After 6 sessions... with Dr. Felicia Huang all the back pain was removed. I want to say she offered me excellent service and I appreciated the honesty given during my visits. I highly suggest her since she is very knowledgeable and experienced and also polite. I recommended her to everybody including this business! Thank you very much Dr. Felicia.Vera Spatar.read more

game_freak 9
22:18 04 Mar 20
I highly recommend Fit For Life Clinic. I was involved in a MVA and Dr. Luciano took me in to start my treatment the... same day! He set me up with the Physiotherapist Sudeep, who is fantastic. Very professional, knowledgeable and caring. I can tell that is really passionate about his work and wants the patient to be comfortable and make a quick recovery. He is very accommodating with my schedule and always makes time. Thank you Sudeep for everything!read more

Sabrina Rameshwar
20:24 16 Oct 19
I am currently a 4th year student and was given the opportunity to complete my field placement at Fit for Life Wellness... and Rehabilitation Centre. My experience so far has been amazing! I was taught how to properly take care of patients and assist with many of the services Fit for Life has to offer. All staff including the chiropractors, physiotherapists, assistants, and receptionists are extremely kind and supportive! They take time to make their patients feel better and comfortable. As a student, I am glad to be involved in this centre!read more
Next Reviews